To Stop or Not to Stop Sharia 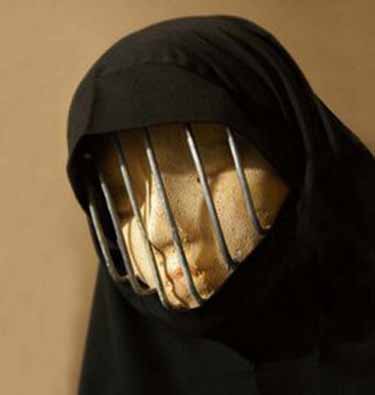 SOURCE: The litmus test to differentiate a progressive Muslim from a radical one is to inquire about the belief in Sharia law being divine. Sharia law is by no means a benign legal system; to the contrary, it is a malignant weapon that aids the pursuit of a global theocracy. The claim that the violence of Sharia law is Allah’s Law destroys the legitimacy of Islam as a “Religion of Peace.”

Like many Muslims I am deeply concerned with the alarming penetration of the institution of Sharia law into the West. After conquering most of Muslim world, this theological python is encircling our civilization and tightening its grip. Muslim women are its primary victims, followed by secular Muslims and non-Muslims. Even a cursory look into Sharia law’s content, spirit and case studies shows that it brutally violates human rights.

Sharia law forms the constitution of radical Islam. Radical Islamists often pose as “Sufi” (saint-like Muslims), “Moderate” or “Progressive” Muslims to deceive the West. But no matter how they dress or what they say, they work to destroy secular democracy and to establish the Islamic State. This deadly virus is flowing through the arteries and veins of the West with the help of numerous politicians, journalists, intellectuals, academics, judges and even religious leaders. An axe can only destroy a tree when it is helped by its wooden handle. On the other hand, the West is constantly bombarded by news of the horrific violence on women and minorities under Sharia law in the Muslim world. As a result, the recent popular opposition to Sharia law in the West was inevitable.

But the resistance is failing; the way the tide is going, Sharia law is appearing to be unstoppable. To defeat it, we need to know its strength and weakness. It is a powerful institution with a legacy of 1300 years, unlimited finance, countless organizations and millions of dedicated followers led by a cunning leadership capable of instant metamorphosis and changes of strategy. Indeed, the leadership has a shrewd ability to learn from failure and a craftily tailored theological structure that allows deception and the killing of opponents.

Sharia law has withstood the world’s two mightiest war machines and emerged as the State constitution in Afghanistan and in previously secular Iraq. Its weakness is in its content and spirit. Sharia law is not only about reading books, it is also about living it. That puts secular Muslims in a stronger and more legitimate position against Sharia law. The Canadian Sharia court that ran for 14 years with the blessing of Canadian law was eliminated mostly due to the forceful movement of secular Muslim organizations MCC and CCMW (Muslim Canadian Congress and Canadian Council of Muslim Women) along with a secular group’s “International Campaign Against Sharia Court in Canada”

If it could happen in Canada, it can happen anywhere.

Western secular and humanist forces are flooding the media with personal opinions against Sharia law without exposing its details. This gives radical Islamists the opportunity and legitimacy to support Sharia law without exposing its details either. As a result, people are unable to make their own judgment as to which side is correct. Nobody wants to be deceived. Once Muslims are shown how they have been deceived in the name of Islam many of them are expected to turn back as I did. One of the most forceful battles in the UK against radical Islam is led by two ex-radicals. The West is not aware of it, but a similar movement is taking place all over the Muslim world. We must use the proofs to create awareness in Muslim societies. A little basic information from past and recent Sharia books can help:

1.      The head of an Islamic State cannot be charged, let alone be punished for theft, murder, robbery, adultery and drinking (Hudood cases) – Codified Islamic Law Vol 3 # 914C of and page 188 of Hedaya the Hanafi manual. This law alone turns the whole Sharia doctrine upside down.

2.      The perpetrators of genocide, mass rape and plunder will not be punished if they repent – Codified Islamic Law Vol 1 # 13.

3.      Rape requires four adult male Muslim witnesses for proof. Women’s testimony is not accepted – Pakistan’s Hudood ordinance 7 of 1979 amended by 8B of 1980. Literally thousands of raped women and girls in many countries have been punished for Zena (physical relations outside marriage) by Sharia courts for want of witness. Ayesha Duhulowa, a gang raped 13 year old girl, was stoned to death by orders of a Sharia court.

4.      Apart from strengthening the oppression of women, the very first impact of Sharia law was the violent fragmentation of Muslim society. Followers of one Imam used to curse followers of other Imams and would not pray after them.

5.      Marriage between followers of Hanifa and Shafi’i was forbidden.

6.      Imam Shafi’i was beaten to death by followers of Imam Hanifa.

7.      None of the Sharia-Imams claimed their laws as God’s law. It was done by Caliphs and a patriarchy that needed the cloak of Islam to legitimize their anti-Islamic control of and women and people generally.

8.      None of the Sharia Imams allowed their law to be enacted as State-law.

9.      None of them joined the political power structures even after repeated invitation; rather each of them was brutally tortured by state-power.

10.  The Sharia-Imams wrote only a few laws; the palace-clergies inserted their own laws in the names of the Imams after their deaths.

12.  Even the Ka’aba was not spared. Followers of four Sharia-Imams used to pray in four pulpits built in four corners of the Ka’aba by their own clergy. This anti-Islamic fragmentation continued until the 17th century.

There are many more examples. So defeating Sharia law starts with the magic question: “Can you show me your laws?” Radical Islamists cannot survive it.